In this article, we will talk about Security lockout/iPhone Unavailable, and 11 things you need to know about your iOS devices.

When we mention Security Lockout, we also mean iPhone Unavailable. Apple has the same issue pattern with two different sayings.

1. What is Security Lockout on iPhone or iPad?

Both Security Lockout and iPhone/iPad Unavailable message is telling you that your iOS device is currently unavailable for security reasons. They mean your iOS device either iPhone or iPad is not available. The device is locked and you can’t get into it to reach any content or settings after entering many wrong passcode attempts.

The situation can either happen when you forgot your passcode, or you (or your family or friends) enter the incorrect passwords inadvertently when you are on the go, or touch the screen unlocking screen unintentionally.  There is also another possible reason that when someone picked up a lost phone and crack the passcode brute-forcedly. All of these incorrect passcode entries that Apple considers unsafe for your data will trigger its security measures.

There are also lots of reports showing that when children were playing with the iOS devices, they locked the devices for touching the screen disorderly.

Some people also got a security lockout iPhone for unknown reasons after a restore, an update, recovery mode, or even after charging it. There are some unknown reasons that triggered the security system to lock the screen. If you got an iPhone Security Lockout screen that happened out of nowhere, you are not alone.

2. What iOS system version does Security lockout or iPhone Unavailable screen happens on?

on iOS prior versions, the Apple iOS software shows you the message that iPhone or iPad is disabled for the same reminder function. The message is also saying that your iOS device is unavailable.

3. What is a security lockout message or screen pattern?

or the alternative pattern:

You can replace the iPhone with an iPad in the message if you use an iPad.

Security Lockout with no timer, what does it mean? There is no more time for you to try any passcode entries. You have to reset it immediately, even if you know the passcode.

3.1 What is the difference between the above iPhone unavailable or Security Lockout message patterns?

They aren’t much different. They both mean your iOS device is not available for security reasons.

It’s probably that you’ll see the messages with consistently the same patterns of Security Lockout or iPhone Unavailable.  But It’s not ridiculous that when you see both the message says alternatively on one device. All patterns exist from numerous tests of our team. The reason is that the iOS 15.2/iPadOS 15.2 or later software both have minor different versions. It’s the reason for the Apple side.

4. How long does the Security Lockout Message last on iPhone or iPad?

If you won’t enter the correct passcode, and if you forgot your passcode, it will stay to say security lockout try again, and in the end with Security Lockout no timer for permanently locked out.

5. What happens if you tap Erase Device option?

you’ll go to the next page that shows you this information.

This iPhone/iPad is in Security Lockout, you can try your passcode again in (null).

When you see the above message. You can’t try your passcode anymore. Reset it to enable it.

When you tap Erase iPhone/iPad option, it will show you the page Erase All Content & Settings with the above title. Also, you can see the support.apple.com/iphone/passcode with Erase Device option in the middle of the bottom.

Tap Erase Device option, and you’ll go to the next page to enter your Apple ID passcode.

After entering your Apple ID password to sign out, Tap Erase option, and you should see your iPhone or iPad will start to erase itself.

Later, you’ll see your iPhone opens with the Hello screen. Set it up. After doing the whole process, all data is gone on the device now. That’s why Apple entitled the page “Erase All Content & Settings”.

Apple also shows you the address “support.apple.com/iphone/passcode” to let you enter it into the address bar of the browser to see the Apple support tutorial(you’ll be redirected to your local language page), we’ve got to the page – Apple Support. 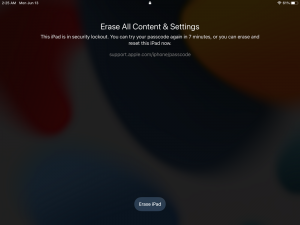 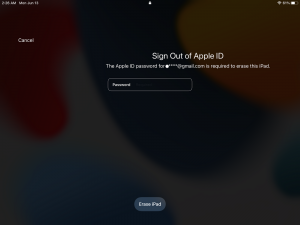 when you tap Cancel on the top left corner of the requiring Apple ID password page, it will return to the security lockout try again screen.

6. How to fix Security Lockout iPhone?

Besides Apple’s Erase device option, you can use third-party software to unlock it.

We’ve posted a tutorial on How to Fix Security Lockout iPhone. There is no one-size-fits-all solution to this problem. People may face slightly different conditions or different settings on their devices. Find the solution that is convenient and suitable for you.

SoftwareDive team proved the software SD iPhone Unlocker is good at unlocking the Security lockout iPhone. Pay attention that the method is a smart fix and resetting the iPhone or iPad to unlock it. No exception it will wipe the data on it.

Refer to the detailed steps on this tutorial.

7. What matters most when iPhone Security Lockout?

It’s a nightmare when you have no backups. Some of our readers have written to us that there are previous photos of their family and they don’t want to lose them. And they have no backups at all. Seeking help from the SoftwareDive team. But it’s a pity. It’s really a hard lesson.

If you would like to learn something about iPhone Backup, refer to How to Back Up Your iPhone/iPad/iPod Touch 2022.

8. Thinking of fixing the iPhone Security Lockout without losing data?

It requires you have previous backups. If you have backups, you can restore your iOS devices by restoring them from the backups, either iTunes backup, iCloud backup, or third-party software or cloud service backup.

You can also use the SD Transfer software to transfer your backed-up contents from your computer to iOS devices.

Refer to the tutorial steps on How to fix Security Lockout iPhone from backups without losing data.

9. Can a force restart fix the security lockout iPhone?

Nope. It will still stay on the security lockout message screen, with the Emergency button or another button like Erase iPhone/iPad.

10. Are there any free ways to unlock the security lockout iPhone?

Yes. There are three free ways to solve the security lockout iPhone, iTunes Restore, iCloud Erase, and the Erase iPhone/iPad option.  Security lockout with the Erase iPhone option is the most convenient way to enable the device newly developed by Apple. The new feature Security Lockout try again in 15 minutes or later with Erase Device option is a good treatment by Apple, but not everyone has this option on iOS 15.2 or later.

11. How to prevent the iPhone or iPad Security Lockout?

Keep your iOS devices in a safe place. It’s better packed in the bag, not in the pockets to prevent disorderly touching of the screen.

And don’t let a toddler or baby play with your devices with important data as a toy. It’s risky for the data.

Write down your passcode on your private email or in your notebook in case you forgot the passcode.

The last most important suggestion after unlocking it. Do keep a regular backup of your data if you care about lots of your data on the device.

Any other questions, you can contact our support or leave a comment, and we will reply to you soon.

We hope you figure out the iPhone/iPad Security Lockout 11 things you need to know listed in our article. You may also be interested in our tutorial iPhone Disabled Bypass, iPhone Unavailable vs. iPhone is Disabled, iPad Security Lockout, How to Reset iPhone without Password or Computer, iPhone Security Lockout How to Unlock It, How to Sign out of Apple ID on iPhone, How to Remove Forgotten Screen Time Passcode, How to Sign Out of A Child’s Apple ID from My iPad/iPhone, How to Factory Reset iPhone 13 without Password.

How to Hard Reset Your iPhone 14

Got your iPhone 14 stuck or frozen? A hard reset probably fixes that. In this…

[Solved] iPhone 12 is Disabled Connect to iTunes Not Working

Your iPhone 12 says iPhone is disabled connect to iTunes, or iPhone Unavailable, but when…

How to Factory Reset an iPad with Buttons

Whether you’re fixing your iPad issues, preparing to sell it, planning to transfer it to…