When you forgot your screen time password, you still need to wait for 60 minutes(1 hour) to try again. And your iPhone or iPad will not be locked, but you can’t change any screen time settings until you enter the correct screen time passcode. Here’s your solution to remove or reset the Screen Time Passcode after failed screen time password attempts without data erasing.

Here’s a quick overview of what you’ll learn in this article:

Read the following facts in Part 1 about what happens after 10 failed screen time passcode attempts.

And Read solutions in Part 2-4 on how to reset or change the Screen Time Passcode after failed attempts when you forgot the password. We provide a no data loss way in Part 3 to bypass screen time failed attempts through SD iPhone unlocker.

Now How Many Failed Passcode Attempts for Your iPhone/iPad Screen Time Password?

If you try more than 10 attempts, it will only limit you to try again in one hour. When you know the iPhone won’t be locked for numerous screen time passcode attempts, it is safe for your data on iPhone or iPad.

You can reset the screen time passcode and save all your data without a factory reset with our method in Part 2 and Part 3. Moreover, if you have any chance to remember your password, you can still try again after waiting for some time.

In the 10 incorrect screen lock passcode entries in a row situation, the answer is different, please refer to How Many Failed Passcode Attempts on iPhone.

How to Reset or Change the Screen Time Passcode after Failed Attempts When You Forgot the Password?

If your newly reset passcode won’t change or reset, you can firstly force restart your iPhone. Or you can use the software in Part 3 to disable the screen time.

The Apple official recommends you a way that is very easy to recover your screen time passcode with the “Forgot Passcode” option. By entering your Apple ID & password, you can recover your password or turn it off.

In this way, you will remove your screen time passcode after 10 times failed attempts.

Here we also offer a quick solution if you didn’t set your Apple ID during the passcode setup. Luckily this is a great method without sacrificing your data. You can remove your screen time passcode without data loss in a few clicks on a PC or Mac. Unlike that, if you unlock the screen time passcode using iTunes, you will need to reset your iPhone/iPad.

Note the following when you use this method:

Step 2：Turn off find my iPhone /iPad first. And connect your iPhone or iPad to the computer.

This software requires you to turn off the function of Find My.

Go to settings>[your name]>Find My, Turn off Find my iPhone or iPad here by entering your Apple ID password. The process only takes a few seconds.

This method is easy, secure, and fast. If you have any questions about using this SD iPhone unlocker to unlock your screen time passcode, please share your comments below. We will try our best to help you.

How to Remove Screen Time Passcode failed Attempts when it won’t work after resetting it as a new password, how to remove or reset/sync it without software(Free).

Dramatically we reset the screen time passcode successfully in the end. Hopefully, it will work for you if the usual scenario happens to you. Likely, there may be some software issues with the Screen Time app.

Option 1: Force Reboot the iPhone and try to change the passcode again to see if it works.

To force reboot the phone: press and hold the Sleep/Wake and Volume Down buttons until you see the Apple logo.

If option 1 is not viable for you, turn to option 2.

If the screen time passcode recovery won’t work for you, try a force restart.

Be careful with this method. Do back up your device Before updating the iOS system in case of any possible errors during the update. If you have any existing iOS system problems, fix them with iOS system recovery.

Do a fully encrypted backup of your whole device, and then update it to the latest iOS 13/14/15 version. The latest versions may overcome weird software issues.

Hopefully, one of the steps should do the trick.

1. How to Set up Screen Time Passcode on iPhone/iPad/Mac?

We have covered a detailed article on What is screen time passcode and how to turn on it.

2. Will Reset All Settings Remove the Screen Time Passcode?

3. What does a screen time passcode do?

The screen time password is the four-digit password used along with the Screen Time feature with iPhone/iPad/iPod. Screen time passcode is capable of locking the Screen Time settings of iDevice, such as downtime, app limits, contacts, communication limits, content & privacy restrictions, and more. Screen time passcode can be used to limit the screen time of your personal device or your family member’s device(with family sharing on). It is widely used to regulate the usage of a child’s iPhone or iPad for parental control. As is known to all Apple’s screen time app is one of the best parental control apps. Screen time passcode is the lock of the overall iPhone content and settings, and the app usage time.  It monitors how much time you and your child spend on your iPhone/iPad/iPod. It can help you limit excessive screen time and keep a good habit to use a mobile phone with a password.

It is not easy to guess a four-digit screen time password. With the increased awareness of cybersecurity, people tend to avoid using easily cracked passwords and common password patterns like “1234” or the date of Birthday. Because there is a good chance that if your phone is stolen or lost, criminals could get into your phone within their first few attempts. So you are less likely to guess the password.

You may also want to read troubleshooting tips about how to fix Screen Time Passcode Won’t Change. More troubleshooting resolutions about screen time passcode Please search on our site.

6. Is there any free tool to remove screen time and restriction passcode?

For ios 12 and earlier versions, Pinfinder is a reputable free tool to help you to get rid of screen time passcode, which supports devices running iOS 7 or later, all the way through to iOS 12.4 – iOS 13 and 13.1 are not supported. The free software also supports Mac, Windows, and Linux.

7. Forgot the Child’s Screen time Passcode, what should I do?

8. What is a default screen time passcode?

Please refer to our tutorial on What is the Default screen time passcode.

You May Also Want to Read:

How to Restore Disabled or Unavailable iPhone without Losing Data [2022]

I saw the message "iPhone is disabled, connect to iTunes" because I forgot my passcode…

iPhone Locked After Update How to Unlock It

Are you want to fix the problem of "iPhone locked after update"? It’s always appealing… 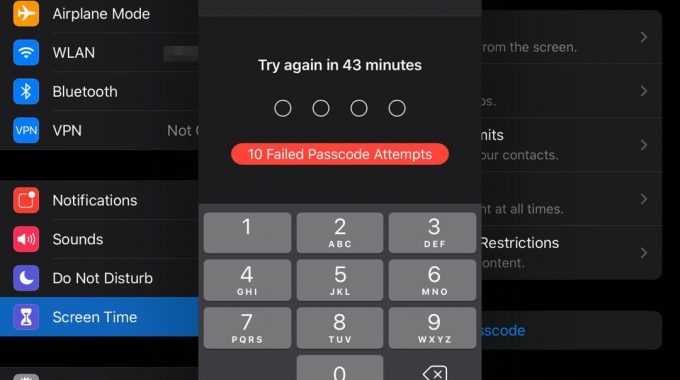